An Inspiration to All: Remembering Lauren Hill 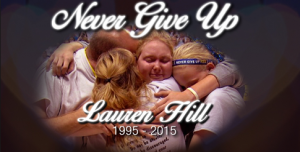 Few people display the level of determination and desire that Lauren Hill did during her time with Mount St. Joseph's women's basketball team. While battling an aggressive and inoperable brain tumor, Lauren managed to achieve her dream. On November 2nd, she scored her first and last basket of the Mount's 66-55 victory over Hiram College at Xavier University's Cintas Center.   Shortly after her 18th birthday, Lauren was diagnosed with Diffuse Intrinsic Pontine Glioma. This rare form of brain cancer typically affects children ages 4 to 9. With the hard hitting diagnosis, Lauren found something inside of her that said she must do something about it. Her goal in all of this was to find a cure for cancer. "When I was diagnosed I remember kind of feeling lonely because nobody understood. And now that more people know about this story and the awareness of DIPG. I'm so happy that people know about it now and that we can get some research going and hopefully find that home run cure for cancer," Lauren said.   "And even though I'm probably not going to be around to see it, it's going to help a lot of people. And that's why we need to keep staying with this and not end it with this game, and keep supporting research," Lauren said at the college basketball opener.   $40,000 was raised for The Cure Starts Now Foundation and pediatric cancer research on the day of the game. Lauren made it her personal effort to leave a legacy for helping to fund cancer research. She has helped raise a total of $1.4 million.   According to Lauren's Physician, Dr. Mariko DeWire at Cincinnati Children’s Hospital Medical Center, what she endured physically during games would have thrown any healthy person off. The loud noises affected her balance and bright lights were especially of putting. She made the best of the environment by wearing sunglasses and headphones on the bench, and earplugs throughout. Her strength is more than admirable. Her love of the game surpassed her suffering. "As you can see, Lauren is strong. She was going to rock it, and she did," Dr. DeWine said. "She did more than rock it."   49 days prior to her diagnosis, Lauren has committed to the Mount. Lions Coach Dan Benjamin and Team immediately bonded with her, making her inclusion into the game even more emotional. The NCAA granted an exemption for the game to be played ahead of schedule so that Lauren could participate, given her grim prognosis.   "The two biggest thing we wanted to accomplish is team and team chemistry, and Lauren helped us do that. But along the way she's made a lot of our girls become very mature, which is apparent. That's what you always want to do. You want your kids to understand what life's about," Benjamin said.   She has been such an inspiration to Professional athletes, aspiring athletes, and anyone following her story. Lauren's story struck a chord in the heart of Cleveland Cavaliers' LeBron James, Seattle Seahawks' Richard Sherman and former WNBA star Sheryl Swoopes. James on Twitter: "You are simply and truly "AMAZING" Lauren Hill!!! Thank you for inspiring me and I'll try my best to match you! Congrats on your game. … You're Awesome!!!"   She made headlines with her #Layup4Lauren initiative benefiting The Cure Starts Now. Challenges were issued for people to spin five times and attempt a layup with their non-dominant hands so they knew what it felt like for Lauren to play.   The news of Lauren's passing this morning has left a hole in the hearts of so many. She has made her mark on this world and will never be forgotten.   "When I leave that's fine. I'm not scared. I'm scared for everybody else, like my family and how they'll handle it. And it will be fine."   To donate in Lauren Hill's honor, please visit: http://www.thecurestartsnow.org/