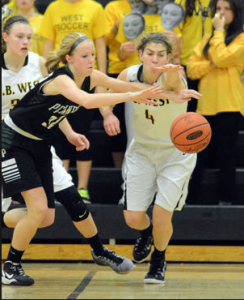 On Wednesday evening, Central Bucks West senior, Mackenzie Carroll rightfully took her place in the school's history. In the final moments of the Bucks District One Class AAAA, she made a foul shot that allowed her to reach her 1,000th career point. She joins senior Nicole Munger in acheiving the prestigious feat this season.  “She’s worked as hard as anybody,” coach Terry Rakowsky said of his senior captain. “Even just physically — I tell my freshmen, ‘Look at yourself in the mirror. That’s how Mackenzie was in ninth grade.’ During her sophomore year, Carroll started to show her ability to rack up points. “When you look at her now on the court — that’s all working hard, which improved her game because she can get to the basket now. And she gets there with a lot of authority," said Rakowsky. Carroll went into Wednesday night's game against Council Rock North with the intention of tightening the gap and taking the win. “Scoring a thousand points is a big deal, but we want states,” said Carroll, who needed six points entering the game. Fans littered the stands in support of Carroll that evening, excited to see her reach that goal. They cheered and held up photos of Carroll's face. The Bucks advanced to face No. 7 Upper Dublin — a 36-33 overtime winner over No. 10 Perkiomen Valley — at home on Saturday at 1:30.