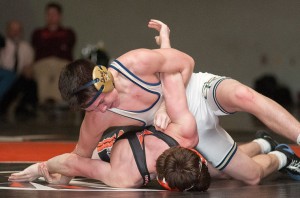 Council Rock South’s team was down four starters and trailing by 8 against Pennsbury Wednesday night. Joe Doyle was behind in the third period of the 170-pound bout. With only four bouts to go, Joe knew he needed a big hit. Doyle made the hit he needed to bring the CR South team to victory. He took Alex Cwenar down. He pinned him in 4:45. The pin gave the Golden Hawks a confidence boost as the Hawks won the final 5 bouts and pulled away the victory 40-27. South (10-1 overall, 6-0 Suburban One League National Conference) was missing Joe Little, Luke Martoccio, Igor Kobzarenko and nationally ranked Riley Palmer. Pennsbury (15-7, 4-2 SOL) was a little shorthanded, too, missing a couple of starters. Pennsbury used four pins and a decision to take a 27-19 lead. Antonio Martoccio (106 pounds) and Spencer Hickman (145) pinned their opponents in the first period. Eric Mongiello (138) and Luke Kowal (160) added pins, and Connor Joyce (120) earned a decision. South stayed in it with pins by Ben Radner (113) and Zack Trampe (132), a major decision by Dylan Schwartz (152) and a decision by Robbie Fasciocco (126). Joe Doyle saved the match with his amazing hit. The Golden Hawks play Friday night against Council Rock North in the District One Class AAA Dual Meet Tournament quarterfinals. If they beat CR North, Spring-Ford, and Boyertown they have a chance of winning the title! Good Luck, Golden Hawks!