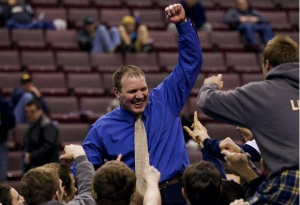 Franklin Regional High School in Murrysville, Pa is home to the American Family Insurance ALL-USA Wrestling Coach of the Year for 2014-15. Eric Mausser has been selected to receive this award by Jason Bryant or MatTalkOnline.com, and President of the National Wrestling Media Association. For over 20 years, Bryant has covered high school, college, and Olympic-level wrestling. Before coaching at Franklin Regional, Mausser was on staff at Duquesne University under Coach John Hartupee. He wrestled collegiately at Clarion. Mausser has been a member of the Franklin Regional wrestling program for the last 10 seasons. He is responsible for taking the Panthers from a notable program in western Pennsylvania to one of the top programs in the nation. Due to Mausser’s work with the Panthers, they have set a PIAA state record for team points (152), state finalists (5), and champions (4) in a single season. Under Mausser’s leadership, a talented senior class has dominated the state championships and state place-winners. Devin Brown, Michael Kemerer, and Josh Shields ended their careers with state titles. Sophomore, Spencer Lee, an ALL-USA first-team selection at 120 pounds, won his second championship. The seniors plan to continue their career into college. Brown has signed with West Virginia and Kemerer with Iowa, and Shields will attend Arizona State. The Panthers have certainly earned their good name – winning three sectional titles, three county championships, and two Western Pennsylvania Interscholastic Athletic League championships. Considered one of the toughest holiday events in the country, they won two titles at the Powerade Christmas Wrestling Tournament in Canonsburg, Pa.  “The most fulfilling part about this group is watching them grow as wrestlers and more importantly watching them become great young men,” Mausser said of his senior class. “This group of seniors was extremely special because of how much time they put into the sport, not only to accomplish their goals but to help their teammates become better wrestlers. They also spent a great deal of time giving back to the sport by volunteering their time at our youth practices. “This group built their legacy not only on their accomplishments, but by giving back and establishing a tradition of excellence.”