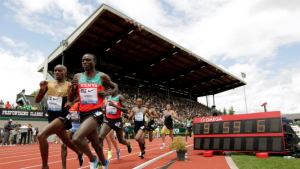 The small town of Eugene, Oregon, known for its rich American Track and Field history, will become the hosts of the 2021 World Athletics Championships. The International Association of Athletics Federations (IAAF) has decided on the affectionately named, Track Town, USA because of its dedication to athletics and a desire to break into the American Market. "We have to give it to Eugene, to a city where athletics is like a religion," IAAF president Lamine Diack said. This is the first time that a location was chosen without a bidding process.  For nearly four decades, the United States has been bypassed in favor of European cities. The world championships, currently held every two years, were first conducted in Helsinki in 1983. Beijing will host the championships this year with the next edition to be held in London in 2017, and Doha, Qatar, in 2019.  The 2021 World Athletics Championship will be held at Hayward Field, the historic stadium used by the University of Oregon track team. It is also the venue that made runner, Steve Prefontaine, an iconic figure in American track. The stadium will be rebuilt to accommodate 32,000 spectators for the 2021 meet.  Diack will be retiring this year and has always hoped the world championships would come to an American city – his hope has been realized.  The IAAF said it bypassed the usual bidding process and chose Eugene because of the financial support offered by the governor of Oregon and the United States Olympic Committee, as well as NBC's commitment to produce and broadcast the event.  However, not all are thrilled about the quick decision and lack of bidding. "I must say I am very surprised by the complete lack of process in the decision the IAAF has taken," said Svein Arne Hansen, a Norwegian who recently took over as president of European Athletics. "The IAAF knew that Gothenburg was a serious candidate for the 2021 world championships. Swedish Athletics and the city had put in a lot of effort over the years to prepare the bidding application but they have not even been given the chance to bid for the event." Gothenburg hosted the fifth edition of the world championships in 1995.  The leader of the bid effort, Vin Lananna, said "It's in the DNA of the people of the great state of Oregon.”  "U.S. athletes do so well on the world stage and finally having an opportunity to be on your home field is a tremendous opportunity, a tremendous opportunity for opening up markets, and a tremendous opportunity for the sport of track and field."