Freshman Wrestler is Living a Dream while Inspiring his Team 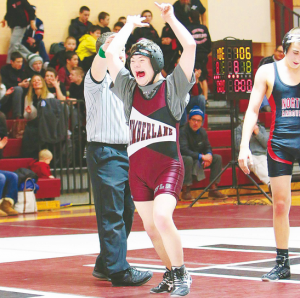 Timberlane High School in Plainstow, New Hampshire has built up quite the reputation for their Wrestling team. After winning 21 state titles over the past 22 years, the team has a proud tradition of working hard and succeeding. Winning is only part of their success however, because the team knows how to support each other not just as teammates, but friends -- Andrew Strzykalski has been a huge part of that. The 15-year-old freshman from Atkinson was welcomed to the team with open arms this school year and has taught some important life lessons about acceptance and determination. Andrew is the first student with Down syndrome to join this elite wrestling team. The team is all about a positive attitude. “I preach that every guy is important. Every guy on the team is valuable and we need everybody to do their best,” said Barry Chooljian, the high school’s head wrestling coach and director of guidance. Although Andrew’s mother, Barbara was hesitant to have her son join the team, she has seen what an amazing influence it has been on his life. He wrestled for two years at the middle school, but she wasn’t sure it would work out at the next level. “They take it very seriously,” she said. With the team focusing more on being a good student first, then a good person and athlete, they have helped shape Andrew’s way of thinking. The team has lent themselves to improving Andrew’s academic performance through confidence building and support. “Now he’s feeling like he’s part of something. He’s recognized. He feels wanted and needed and included. That’s all anybody wants,” she said. Teammate Brandon Berube, 14, of Atkinson, wrestled with Andrew last year. He said he’s a strong wrestler. “It’s fun having him on the team. Sometimes he makes some jokes and makes people laugh. He’s a good inspiration on the team,” Brandon said. Dylan Hughes, 15, of Plaistow, also likes wrestling with Andrew and helping him out. “He’s wicked happy when he wrestles and he always talks about it when he’s in class,” he said. Also working with Andrew as one-on-one para-educator is Nathan Lawrence, a volunteer coach and former wrestler. “Nate helps me to wrestle hard and to focus,” Andrew said. “Mind, body, and spirit.” He works just as hard as the rest of his team, taking regular classes and attending team practices. “We expect as much from him as we do from anybody else,” Lawrence said. Both academically and athletically, Andrew consistently pushes himself to the next level. He goes through three-hour practices with the team, consisting of running laps, doing sit-ups and push-ups. He also plays basketball, takes karate lessons, and is interested in football. The time he has spent playing guitar has peaked his interest in launching a music career someday. “If you have any question about music, he knows everything,” Chooljian said, laughing. Andrew continues to amaze his family, friends, and teammates with his shining personality and drive to do more every single day.