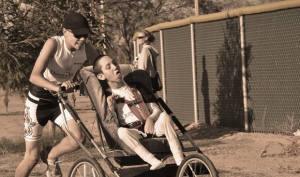 Even the most fit and eager individual, competing in a triathalon is quite a challenge. Swimming, cycling, and running -- the three events involved -- are exhausting, requiring all of the physical strength and endurance once can muster. For Spencer Zimmerman, a senior at Gilbert Highland High School, he took on all three events while helping his friend through its entirety.   After most of Spencer's friends declined doing the triathlon with him, he thought that Dayton Hayward may want to join. Dayton has cerebral palsy, and communicates through blinking. Friends since the age of 12, Spencer helped Dayton complete a triathlon four years ago. The two athletes swam, biked, and ran together until the finish. "It was really cool," Spencer said. "And I could totally tell he enjoyed the whole thing. He was smiling the entire time. So we did it the couple years after that."   Having Dayton by his side made the strenuous nature of a triathlon worth it. "Definitely, just knowing Dayton was right there, because I was so close to him -- I couldn't not be close to him the whole time -- I wasn't focused on my soreness, like I had in previous races," he said. "It was like, I'm doing this for Dayton, I've got to push him through this. He wants to finish, I want to finish." The boy's families thought he was crazy for taking on such a feat, but they all saw how much it meant to Dayton. Those who have not taken the time to get to know Dayton were able to see what an amazing person he is. "People started to realize he was not just this kid in a wheelchair; everyone would talk to him, ‘Dayton, that was so awesome, the race.' He would sit up, he'd smile, he'd start blinking," Spencer says. "It was more of a positive thing for him than it was for me, all the stuff that comes with it, and it's cool because everyone knows his name, everyone talks to him. It made him more included in church, in school, in scouting and all this stuff. It was as good for him as it was for me."   Spencer currently plays rugby, volleyball, football, and runs track for the high school. He is very involved in his church as well. He plans on embarking on a two-year mission with his church after high school. After that, he is ready to spend a lot fo time in school to become an emergency room doctor. "I feel like being an emergency room doctor, you get to see everything and just get to help so many varieties of people, from stitches to surgery kind of stuff," Zimmerman said. "It's always intrigued me, I think it would be awesome."   Zimmerman is focused on leading his rugby team to a few more victories and spending time participating in church activities. He spent time scouting individuals to help put together a 5K benefit run. 100 percent of proceeds were donated to the United Cerebral Palsy Foundation.   "The 5K run we did was kind of, ‘Come out and support this,'" he said. "But the triathlon was just two friends going out and doing a triathlon together. It was more of a friendship thing instead of, like, a scouting thing that was expected, I guess you could say. It was still enjoyable to do, but the triathlon I enjoyed more."