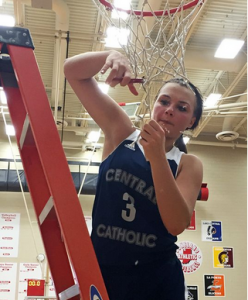 Central Catholic girl basketball sported a familiar phrase of hope on the backs of their shooting shirts -- "Keep going. Keep fighting. Keep battling." Just three days after the death of their beloved assistant basketball coach, Jeff Dienhart, passed away, the team needed his words of encouragement more than ever. And keep on fighting they did; with just over 50 seconds left, Central Catholic outscored defending state champion Oregon-Davis, bringing them to a 47-44 Class A north semistate victory. "This was the most important game to Jeff of this season. He stressed that all year. We knew we had to win for him," said senior Emily Burks, who scored nine points in the final 1:44. All of the girls were feeling the pressure to do their absolute best to make Coach Jeff proud. "Losing Coach Jeff is weighing on all of us right now," Central Catholic senior Sammy Bonner said. "We know we have to do it for him right now. We were hoping he would be able to be there. Even though it's painful, we know we have to do this for him." An inherited condition, Cystic fibrosis is a life-threatening disorder that causes severe damage to the lungs and digestive system. After last season's loss to the Bobcats, Dienhart left the hospital and arrived at Crown Point in time to see the final game of the season. He had to be there to see his team, which he believe in very much, win the Class A state title. As the season pressed on, Dienhart's condition worsened. Sadly, the players were informed last Wednesday of the passing of their beloved coach. "The whole game we were stressing that we were playing for Jeff," junior point guard Cameron Onken said. "We had been talking about having heart, having dedication and just fighting like he fought, even in his last days. I definitely think that is what pushed us to have that motivation at the end." Onken make two free throws, cutting the gap to four. Burks felt the comeback and sunk a 3-pointer from the right wing. Burks followed up with a foul with 21.9 seconds left, giving them a 45-44 lead. "We told them during a timeout that you've got to keep on fighting," CC coach Craig DeVault said. "These girls kept on battling throughout the game until the final buzzer." "We gave as much heart as we had," Burks said. "We showed our heart, put it together and earned the points that we got. I am very proud of our team for that." "Jeff loved this team with all his heart and saying he will be missed is an understatement."