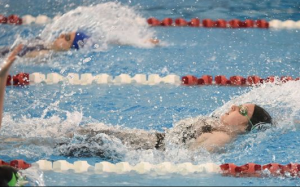 Kiera Supple has been in the spotlight for some fantastic firsts for her school’s swimming team. Supple, a junior at Salem Academy in Oregon, was one of the first swimmers from the school to win a district championship and qualify for the OSAA Class 4A/3A/2A/1A State Championships in 2013. On Saturday she gave the school its first state championship in swimming, taking the win in the 100 backstroke in 59.29 at the state meet at Mt. Hood Community College "It feels really amazing," Supple said. "It feels really surreal, like you've been dreaming about it, but it actually hasn't happened. It's great. We've had so much support come out and help us, it's really amazing." Supple's win set the tone for the team and their capability of competing at the state level. In fifth place, Salem Academy reached its best state finish in four years and third consecutive top 10 placing. "I think that's our goal as a program is to get as many state champions in the future as possible," said Salem Academy coach Maria Robertson. "It's really awesome Kiera's our first, and she will always be that. And I think she'll be something that these other girls and guys can look up to, a person they can look up to in the future. We like to dream big, and Kiera helps with that a lot." Joining this team effort was Grace Warde, Emma Boles, and Joelle Debban, placing second in the 200 medley relay in 1:54.50. Kiera displayed her knowledge of the sport at the start of the backstroke with her ability to pace herself and finish strong. She appeared to start slow and was the third swimmer to touch the wall after the first 25 yards. Coach Robertson comments, "I was watching that, too, and I was like, ooh, she's not as much in the lead as she normally is, and then at the wall when she flipped I saw her split, and I said, no, she's doing what she needs to do. I was confident that Kiera's endurance was going to take her home." Supple knew she needed to pick it up, quickly blowing past Sweet Home sophomore, Jessica Coats, by almost a full second to take the win. “I could see the two girls next to me really close to me and it really pushed me to go faster,” Supple says.