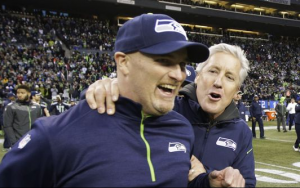 High School graduate, Dan Quinn, is coaching in his second consecutive Super Bowl with the Seattle Seahawks as their defensive coordinator. Quinn played offensive and defensive tackle at Morristown, where he was also a thrower for the indoor and outdoor track and field programs. A rare two-year captain who had started as a sophomore, Quinn quickly earned his teammates' loyalty — as well as that of hundreds of players along the way. Majoring in Elementary Education, he had his sights set on returning home to teach and coach. Unfortunately, teaching jobs were hard to come by locally, so he began work with the defensive line at William & Mary and then Virginia Military Institute. He spent the next five years as the defensive line coach and defensive coordinator at Hofstra. In 2001, he had a big break into the NFL with San Francisco. He’s had stints as an NFL assistant with the San Francisco 49ers, Miami Dolphins and New York Jets. He coached the defensive line in Seattle in 2009-2010 before leaving for two seasons spent as defensive coordinator at the University of Florida. He returned to Seattle in 2012 as defensive coordinator, succeeding Gus Bradley, who left to become coach of the Jacksonville Jaguars. Shortly after Seattle takes on the New England Patriots in Sunday’s game, Quinn will be taking on a new role as Head Coach of the Atlanta Falcons. NFL rules dictate that Quinn cannot take the job until his team finishes its playoff run; but, he is relishing each moment he has with the Seahawks. “I am having an absolute blast with these guys,” said Quinn. “If I didn’t enjoy the moment of this experience, that would be crazy. … they (his players) are some of the most relentless competitors. Can you imagine being on the practice field with them? In the meetings, they are always trying to find an edge.’’ The Seahawks have won 11 of their past 12 games following a 3-3 start. Seattle is the first team to lead the NFL in fewest points allowed for three straight years since the 1969-71 Vikings.