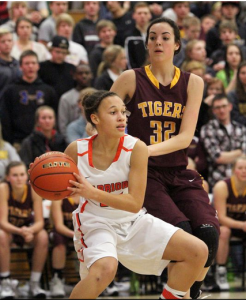 Tuesday was cause for celebration for Harrisburg's District 2AA triumph. What is being touted as a great game ended in a strange way. After falling behind, a controversial call allowed Harrisburg to close out the game, inching slightly ahead of the Warriors 59-56. With 5.1 seconds left and a lead of 56-55, Washington's Syd Arrington was fouled and the whistle blew. Sam Slaughter from Harrisburg pressed on to fight for the ball. “It should have been called immediately,” said Washington coach Jamie Parish, referring to continued action after the initial foul. “In that situation, the officials know that they are going to foul us. It should have been a quick whistle — the play should have been over.” The two players came to tousle when Arrington, with two hands on the ball, whipped her arms upward causing Slaughter to crash onto the floor. Arrington said she tried to “chin” the ball up toward her chest in an attempt to avoid a jump ball that would have given Harrisburg a possession. Officials deliberated and garnished Arrington a technical -- her fifth foul -- ruling that the junior post threw and elbow. Adding to the eccentricities of the game, Harrisburg got a pair of free throws and posession of the ball, but not before Washington had its chance. Washington called upon Anna Goodhope, a move Parish said the officials “OK’d.” But a moment later, the refs explained that Arrington’s substitute, Madison Aasen, would have to attempt the free throws. Aasen missed both attempts, and then Danni Honner — who led all scorers with 25 points — knocked in both Tiger attempts to make it 57-56. During halftime, Harrisburg pulled ahead 31-26. Autumn Steffen sunk a 3-pointer with two seconds to spare. Goodhope proved to be a strength for the Warriors, scoring 10 in the first half, while Donner shined for Harrisburg. “You’ve got to credit (coach) Mayer and the Harrisburg kids — they played their butts off. They showed up to compete," Parish said. Washington’s season is on the line Thursday as the Warriors host Yankton in the region qualifier. Harrisburg will visit No. 2 Lincoln.