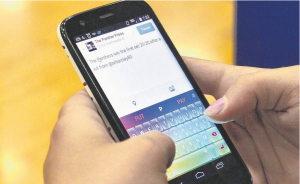 Saegertown High School junior Becca Siple, 17, of Saegertown, tweets a Saegertown boys volleyball update during a match against Cambridge Springs.   With the ever evolving flow of technology, we have become a society of people who expect information at their fingertips – and we don’t want to wait for it either. The “Twitterverse” has certainly quelled the craving for the “I want it and I want it now” mentality of this generation’s high school students, however, this isn’t necessarily a bad thing. The more readily available information is, the easier it is to share with others, creating a dialogue between students that may have taken much longer.   As discouraging as it may be to see teen’s faces buried in their smart phones as opposed to engaging in human interaction, positive things are happening. Take Saegertown High School, for example. When a Saegertown fan sees a high school student tapping away at a smart phone during a sporting event, it might not be the typical teenager texting to friends. A reporter from the Panther Press student newspaper might be live Tweeting the game.   Saegertown’s journalism department is raising the bar for area high school newspaper’s athletics coverage. "On a daily basis, I'm impressed with what my students are able to do," Saegertown journalism teacher Stacey Hetrick said. "We have a following of around 500 people on Twitter, and it's really interesting and gratifying to see the site get traction. The kids are getting looks and feedback on the tweets as they are able to share information and tell the story of our sports teams."   In 2011, Hunter Johnston brought up the idea of integrating Twitter to reporters’ coverage of the school’s athletics. "Hunter is an excellent sports writer, and he wanted more ways for more coverage," Hetrick said. "He then came up with the 10 'Twitmandments' of tweeting." The former Saegertown running standout created a list of rules to follow when tweeting that married casual social media with strict journalism standards. Some of the "Twitmandments" are general newsroom rules, such as making sure students tweet in Associated Press style. Others are new-age rules, such as using one hashtag per tweet. Johnston's list also includes signing on and off to alert the audience when coverage begins and ends. The "Twitmandments" also encourage reporters to tweet photos, tag athletes' Twitter handles and tweet at least 10 times per event. Current Saegertown students have made sure to maintain the coverage standards Johnston set. Different students are assigned to Saegertown home events, and some attend nearby road events as well.   The coverage ranged from scores, to big plays and other news from sporting events. Unlike other schools who typically post final scores or important game stats, the Panther Press puts it all on the table – win or lose. "It's great that our staff pretty much has every spring sport covered, and we're able to document everything," said social media editor Jess Tomiczek. "It's great providing the coverage and knowing as athletes that we have coverage as well." Tomiczek is one several athletes on staff. She competes in cross country, basketball and softball.   Due to the amazing talent of staff and students, the Panther Press’ Twitter coverage has started to spread around District 10. "We've had several schools contact us asking for advice on what we do," Hetrick said. "Fort LeBoeuf just called the other day about wanting to create a Twitter account for live coverage as well. We've modeled ourselves after newspapers like the Erie Times-News, and it's been great exposure for the athletes and our reporters."