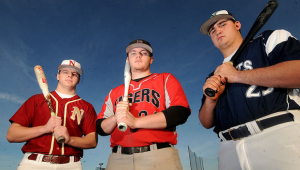 Former Northview baseball star, Shawn McCorkel, is excited to see players take part in an event so near to his heart. McCorkel participated in the event when it first began. The 20th Annual Wiregrass High School Home Run Derby has grown to something that has caught a lot of interest. “The buzz in the locker rooms right now is the home run derby,” McCorkel said. “That’s cool. They’re excited about it.” Now, a coach with Dothan Post, McCorkel thinks back with fond memories of the times he competed in the derby. He even got to swing against Chipper Jones, who was an invited pro at the event during his early years with the Atlanta Braves. “Everybody plays home run derby in their yard, and they play video games and what not, but to be a part of the first one ever around here is neat,” McCorkel said. The plans are to move the event around to different schools in the coming years, says Jon McLain, head coach with Dolthan Post 12, an American Legion baseball program. This year’s event will be held at Northside Methodist Academy. “They have done a really good job of upgrading their facilities,” McLain said. “One year we had it at Northcutt Field (Westgate Complex in Dothan) and nobody hit one over. This one (field) really gives everyone a chance. Even the smaller guys can get in a groove and win it.” Admission is $5 and benefits the Dothan Post 12. The finals are scheduled to start at noon. That final round brings together the top three high school players who have advanced to slug away for the championship. Two professional players will also join the high school players in the finals. Former Troy University standouts and current minor league players Danny Collins (Pittsburgh Pirates) and Trae Santos (San Diego Padres) are the invited pros who are scheduled to participate. Three of the high school competitors – Reid Agrella of Dothan High, Andrew Benak of Northview and Hunter Lunsford of Northside Methodist Academy – were on hand for a press conference at the field on Monday. Agrella, a senior for the Tigers who has signed with Wallace College, finished fifth in the event as a sophomore when it was held at Rehobeth High School. “If you go up there and try to hit a home run, most likely you’re not going to hit it out,” Agrella said. “I just try to square it up, hit it hard, and if it goes out, it goes out. I think it will gauge me against the other power hitters around the Wiregrass area. If I come in last, if I come in first, I’ll just go out there and have fun.”