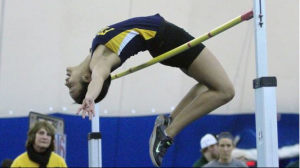 This spring, Somerset County’s girl’s track is ready to jump into action. The state’s best competitors have a series of accolades under their belt. Frontrunners this season are Hannah Taylor of Montgomery, who has been a favorite in the event since entering high school. She showed how capable she is this past winter when she finished third at the Meet of Champions. During her high school career, she has tackled an array of challenges, including taking the win for the Somerset County high jump title last spring and this past winter. With a two time jump of 5-8, Taylor claimed the Central Group IV and Group IV titles during the 2014 outdoor season. She tied the fifth best performance in the nation by jumping a 5-8. Another stand out, Franklin’s Selena Thorne, has soared into the spotlight as well. Now a junior, Thorne has much experience under her belt. Her preparation will come in handy during the junior outdoor campaign with the Warriors this spring. “I feel like I know more things about the sport now,” Thorne said. “The experience definitely helps me and is an advantage going into the season.” Thorne followed Taylor at the MoC in the high jump, completing the event in fourth place (5-4). Thorne was consistently in the top five during the winter season, which is something the junior feels will help her when heading outdoors. “It pushes me to a higher level,” Thorne said about her success indoors. “Outdoors is definitely is bigger for me so it makes me want to go harder during the spring. I’m definitely looking forward to the outdoor season.” Ridge stand-out, sophomore Jessica Creedon, is the youngest of the group. Jessica exudes a level of maturity not often seen by her age group. While battling a sickness, she finished out the winter MoC with a fifth place finish, but she feels she could have done better if it were not for the setback. “I’m satisfied with where I’m at, but I’m definitely hungry to do better,” Creedon said. “I didn’t necessarily meet my exact goals this past season, I wanted to get a 5-6, but I ended up getting a stomach virus. I set high expectations for myself and I’m excited to see how I do during the spring season.” Creedon was challenged early on, competing against Taylor and Thorne as a freshman. “It was exciting,” Creedon said about her rookie campaign. “It was definitely interesting because of the new experiences. It was awesome to meet all of the new competitors and experiencing all of the new events.” In addition to track, Creedon is also a member of the Ridge volleyball team. She feels that volleyball boosts her success for track season. “Volleyball helped me improve my vertical because we do strengthening for legs,” Creedon said. “It keeps me moving during the fall season. Volleyball is a fun sport to compete in.” Taylor, Thorne, and Creedon know that the spotlight is on them each time they compete in an event, but the girls know how to handle themselves. A mutual respect is shared amongst the three. Their friendship allows them to separate fun from focus, and helps them work towards becoming the best in Somerset County, and possibly the state. “We are all good friends and we talk at the meets,” Taylor said. “Once the bar goes up we all know that it gets serious.”