Teams Gear up for the Penn Relays 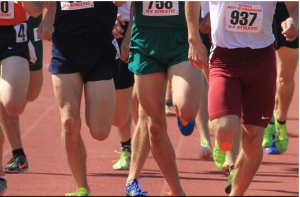 Spring is here and with that comes more sunlight, warmer temperatures, and festivals galore. The Philadelphia area is booming with plenty of fun outdoor activities, whether you wish to participate or simply be a spectator. One of the most anticipated events of the season is the Penn relays, which will take place in a week at Franklin Field in Philadelphia. Teams give it everything they’ve got to qualify for the big race, but few actually succeed.   Many teams have felt the disappointment of not making it; especially the Bernard’s boys track squad, a program with a rich history. During the indoor season, Bernards gained a lot of recognition when they became one of the fastest groups in New Jersey. The 4x800 assembly ran a 8:01.72 during the New Balance Indoor National Championship, but wish to make their mark on the Penn Relays. “We were supposed to get 26th in that race and we ended up getting third, which is insane,” senior Quintin Petty said. “We are hoping to break eight and Penn will be the place to do it. We don’t want to stop getting better.”   Ending a ten year streak of disappointment, the team has met qualifications this year and intends on making their presence known. “Every way we can we try to keep that winning tradition alive,” Bernard’s coach David Szostak said. “We’ve done pretty well over the years. We’ve always had a strong distance program and we try to keep that tradition alive.”   But they are certainly not going to sail through with The Mountaineers hope to defend their tradition of being known as strong competitors. Will Howes, one of the more experienced Mountaineer sprinters, will give his group the boost they need right at the start. The second runner and second fastest on the team is Richard Gruters. Third will be Richard’s brother, Stewart, a freshman and the most inexperienced of the bunch. Inexperience does not mean a thing for him because he has already turned out some pretty note-worthy times.   The anchor of the group, Petty, is the fiercest and most determined competitor on the Mountaineer club. A former wrestler, Petty has learned valuable lessons that he has carried over to track. “I use to wrestle and I would always block out everything around me and get mad at the person in front of me. Now all of them just yell 'get angry,' which is pretty funny," he says.   Even for the most determined athletes, the Penn Relays is no easy task for a high school runner. “We want to keep their heads on straight and not have them freaked out by the competition,” Szostak said. “The Penn Relays is a huge meet and has great competition. We just want them to run within themselves and run smart. If we do that we should be able to compete.”   “I’ve seen pictures of the stands, but we’ve never had that many people watch before,” Petty said. “It’s going to be awesome; I can only imagine what it will be like.”   “There’s something special and unique about the Penn Ralays,” Szostak said. “You don’t know what it’s like until you experience it. Luckily, I have been through it with teams before. I kind of know how to get them ready mentally. I like to think the Penn Relays is the first major step towards our goals for the season. We are going to take it for what it is.”