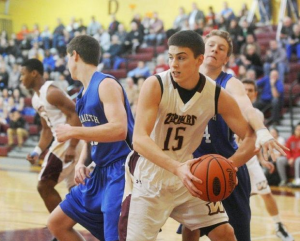 Whitehall senior, Brett Radocha has been the superstar of the High School's boys basketball team so far this season. The center racked up a game-high 21 points on Saturday afternoon's game against Bangor, launching them into a 50-41 victory in the District 11 Class AAAA quarterfinal at Pleasant Valley High School. The win advances the Zephyrs into the semifinals today, against Nazareth. Radocha showed his skill with a 3-pointer, and made 4 of 6 from the foul line. He also had six rebounds.“We always feel like Brett can score,” Whitehall coach Jeff Jones said. “Part of our emphasis is to get him the ball inside. Teammate and fellow senior, Jacob Meyers, assisted with 14 points for Whitehall, which brought them to a 14-7 lead. “Bron does a great job. I really respect those kids. They played as hard as they could," said Jones of Bangor's coach, Bron Holland and team. In the third quarter, senior forward Shavaughn Morris hit a basket which led the Slaters 25-20 with 18 seconds to go. The lead didnt' last long, however, because the Zephyrs bounced back 28-26 with five minutes left in the third. “In the second half we did a better job chasing their shooters,” Radocha said. “I give credit to our guards for contesting their shots.”